Spicy Cheesecake is a "company" a friend (Kevin Klute) and I created in high school when we wanted to branch from making small pc games to mobile apps.  On PC we made a few simple games with PYGame, and when we moved to Android we started with PYGame for Android.  This was not very stable or efficient so we ended up deleting those apps once we moved to Java.  I was the art lead and he handled most of the programming. 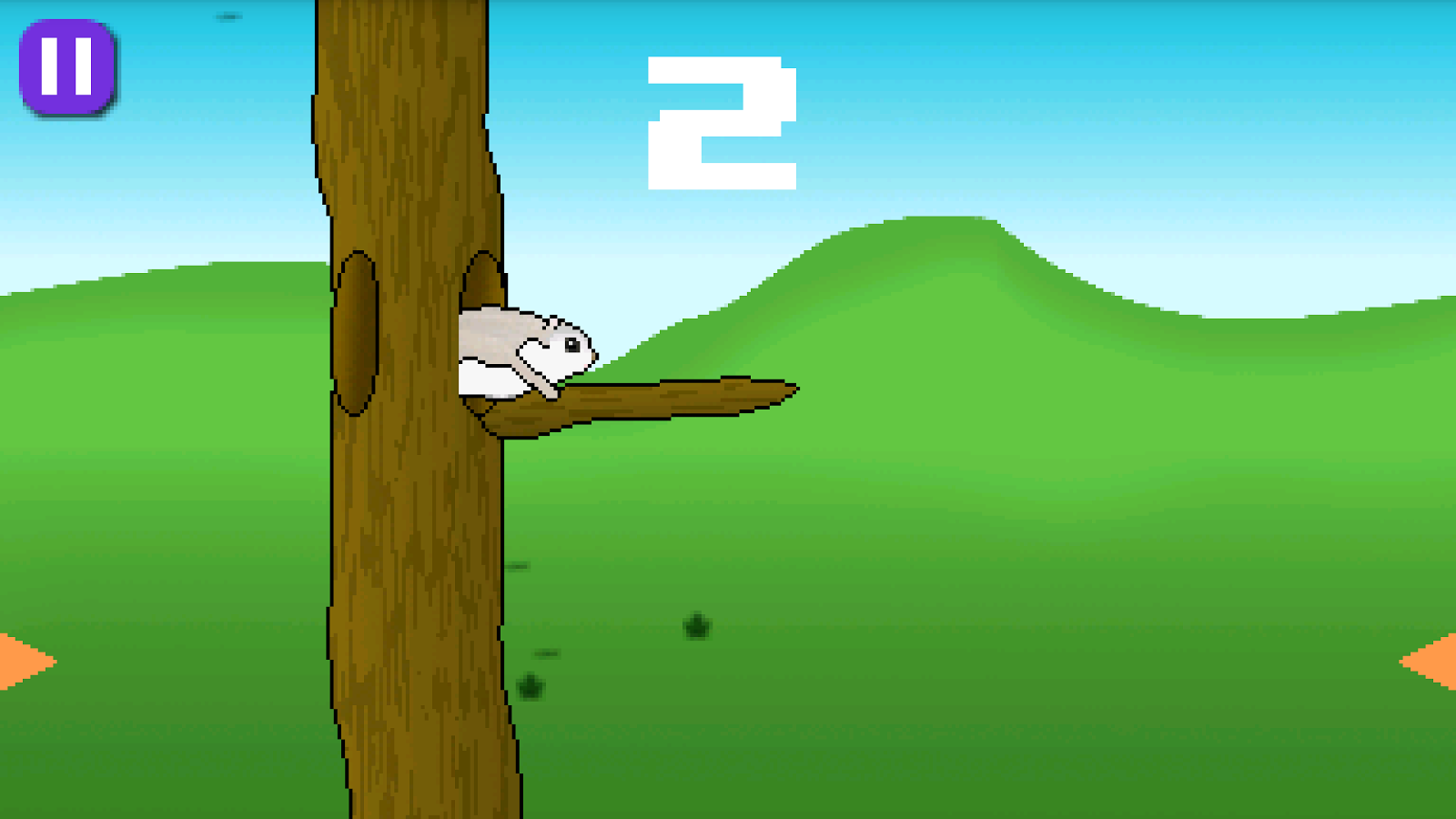 Fred was one of our earlier games, and required us to run it in 144p due to performance issues. We later realized our error but left Fred as we were no longer interested in updating it. 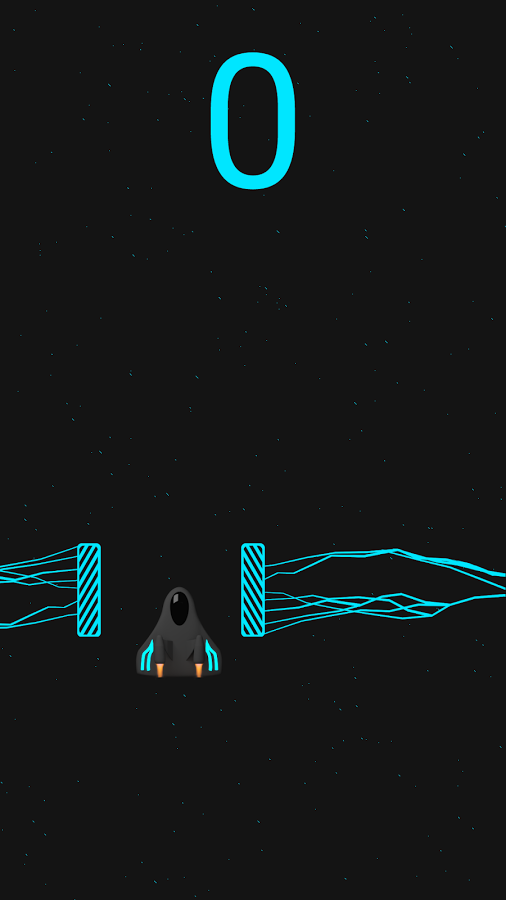 Rocket Dash was a fast paced endless runner that sped up the further you went. It was our second app and the feel was much better than any of our previous apps.  It was our first game to feature Google Play leaderboards and achievements.

We worked on an unreleased game titled "Election Simulator 2016" that made it to the final stages of development, but was scrapped as we both agreed that election based comedy had already been way overdone, and was now rarely funny. This project was started in April of 2016 and was abandoned late September 2016. 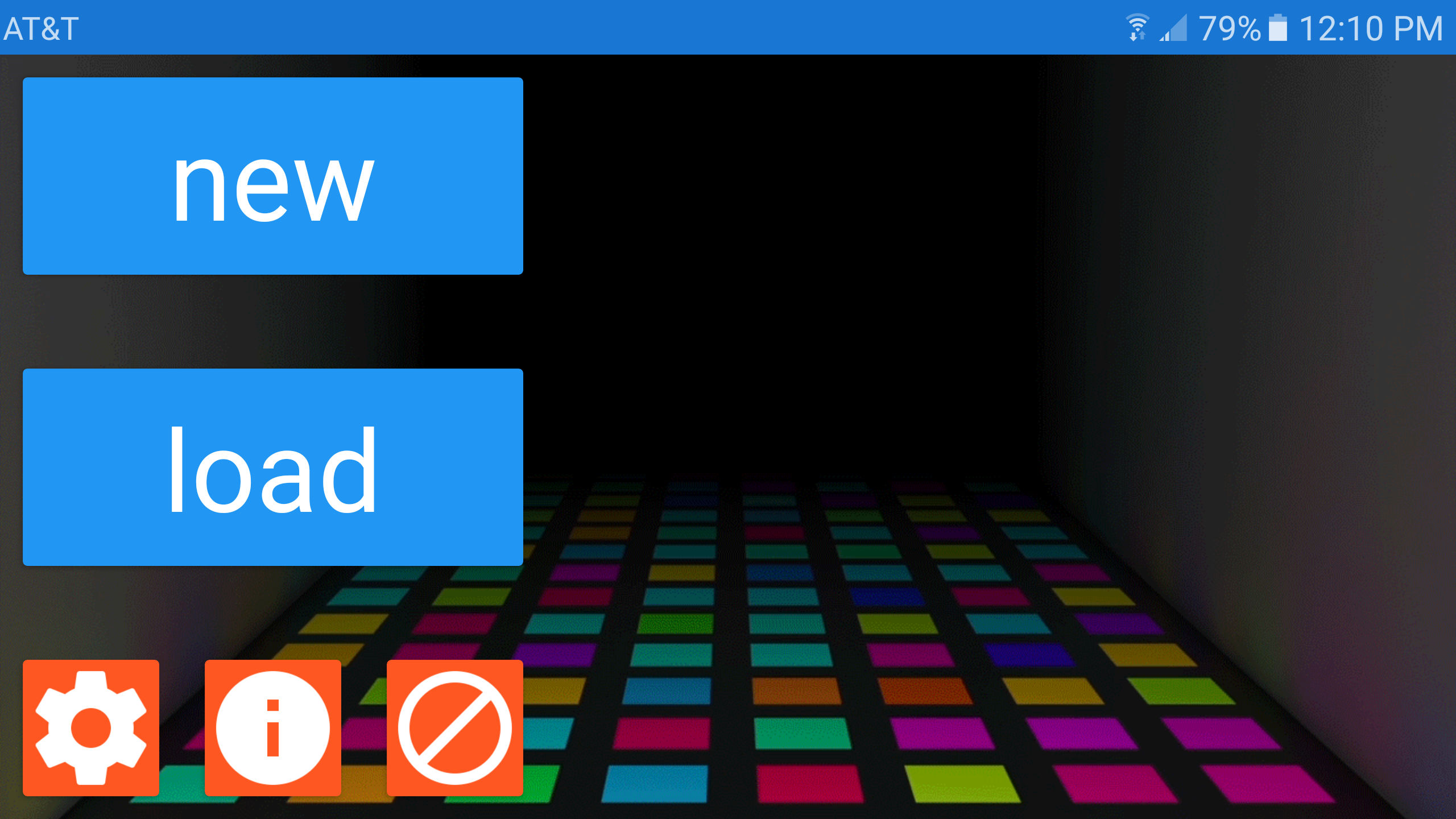 This was going to be the home screen.  It was a GIF of a disco floor changing colors and was going to have the cartoonized candidates dancing on it.  New and load games were fully functional at this time. 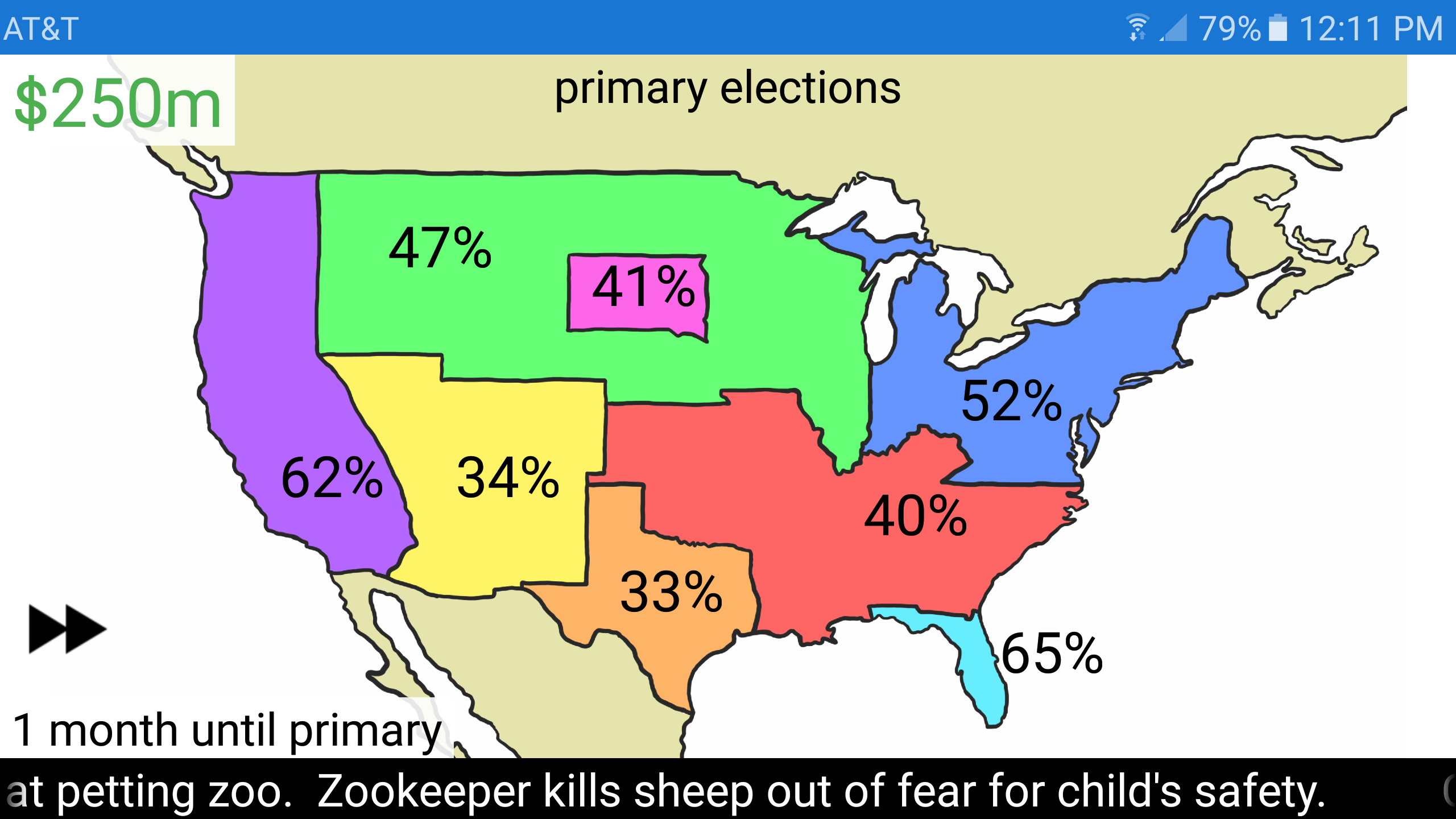 This was a screenshot of the game screen.  You could select a state and allocate funds to it for campaigning if you weren't doing well.  You had the option to do this after every question.  Your opponents would do this at random.  At the bottom there was also a news bar that would scroll across the screen with "onionesque" headlines and could also be influenced with how you answered a question. 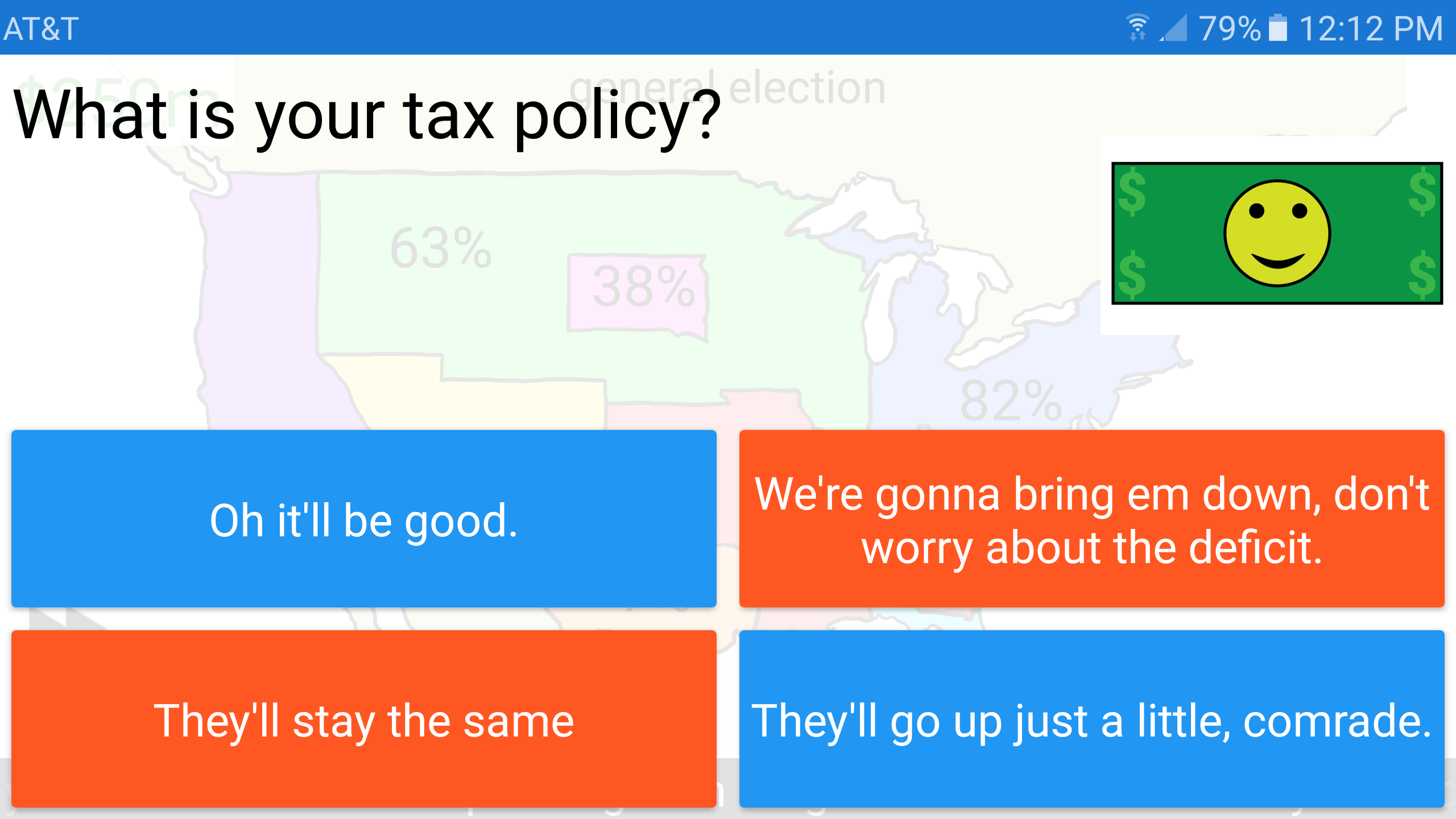 This is an example of a question screen.  On it you would have 4 options that each had their own weights for how different groups would react to that choice. (ex. liberals, conservatives)  Each state had a different percentage of each group.  In the right-hand corner was a question image for each question.  Some question images would be reused for different questions. 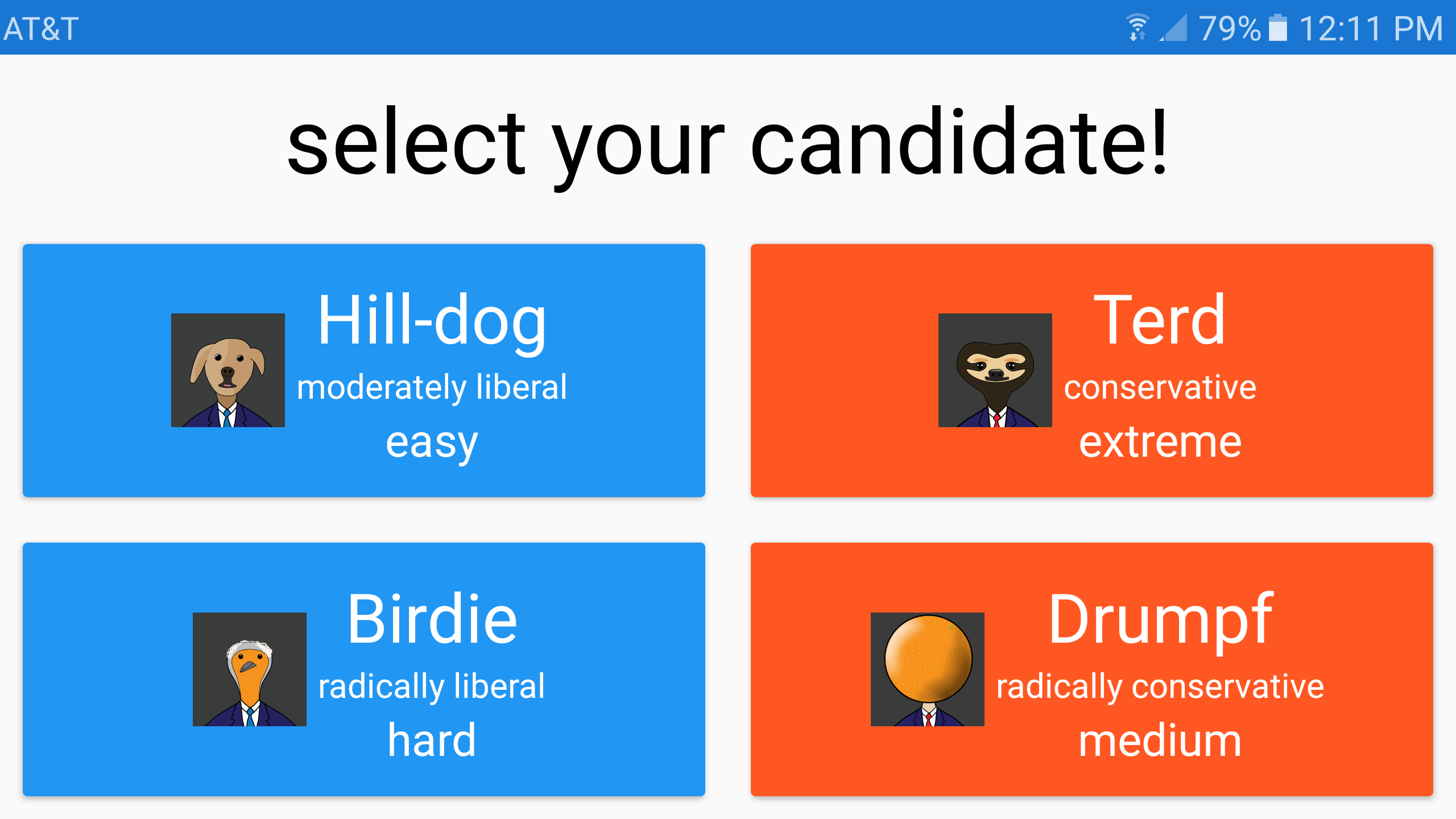 These were the four candidates you could choose from.